I have never guest hosted before, but it is a privilege to share with my readers No Ordinary Baby, written by my sister-in-law, Jeanne Munton.

We celebrated the Munton Christmas at their home this year, and she wrote this just for us. As we sat in a barn filled with hay, lit with electric candles, complete with a barn kitten, she read each section.  After each scripture was read, one of the grandchildren would place a piece of the nativity, culminating with the placement of Baby Jesus in His cradle bed. 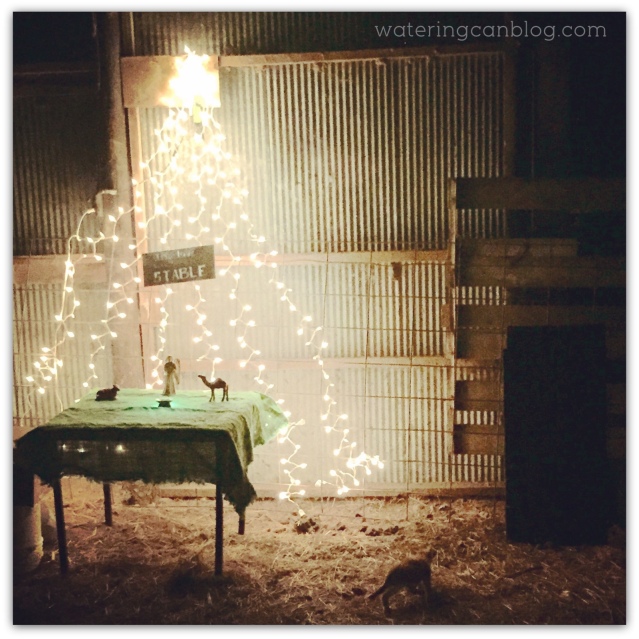 The “greatest story ever told” unfolded in a stable; an ordinary barn where the smell of hay was strong and other pungent odors mingled in. It was likely crowded with animals, since there were so many travelers in the city of Bethlehem during the time of the census. There was certainly nothing special about this stable. It was a place prepared for the keeping of animals, not for the birth of a King. Perhaps a stall was hastily cleared out to give a little privacy and a birthing room of sorts to a weary Jewish girl and her nervous husband.

“Everyone traveled to their own hometowns to have their name put on the list. So Joseph left Nazareth, a town in Galilee, and went to the town of Bethlehem in Judea. It was known as the town of David. Joseph went there because he was from the family of David.”

The donkey here represents a common mode of transportation at this time in history. We often see pictures of Joseph leading a donkey that carried his precious Mary as they traveled to Joseph’s hometown of Bethlehem for a census that just so happened to come at the time when Mary’s baby was due to be born. Yet we know there are no coincidences in God’s plans. There was nothing special about this donkey, yet one was possibly used to carry the unborn Christ child to the very city that, hundreds of years before, God had said would be the birthplace of the Savior of the world.

Micah 5:2
“But you, Bethlehem Ephrathah, are the smallest town in Judah. Your family is almost too small to count, but the ‘Ruler of Israel’ will come from you to rule for me. His beginnings are from ancient times, from long, long ago.”

Since most fields were not fenced, the only way for Shepherds to keep the sheep together and safe from predators was to sleep out in the field with them, and someone had to take the night watch. Nobody really wanted to be around shepherds because they smelled like the outdoors and stinky sheep. However, God sent an angel to tell these shepherds that God had kept His promise and had sent the Savior to the peoples of the earth. And as if one shining angel appearing in the dark of the night wasn’t enough to convince them, a whole host of bright angels suddenly appeared! They were singing praises to God. Maybe they were just too excited to stay quiet any longer! The stunned shepherds made a quick decision to go into Bethlehem to see for themselves what the angels had told them. Mary and Joseph were amazed by the shepherd’s story. After all, these were only shepherds.

Luke 2: 10-12
“And the angel said to them, “Do not be afraid; for behold, I bring you good news of great joy which shall be for all the people; for today in the city of David there shall be born for you a Savior, who is Christ the Lord. And this will be a sign for you; you will find a baby wrapped in cloths, and lying in a manger.”

The book of Matthew tells us about the wise men, the mysterious Magi, who had traveled a long way and had gone to quite a bit of trouble to find the reason for a new star discovered in the sky they studied so intently. These were likely to be respected and important people from the east who saw the connection between the star and the prophet’s words, and they knew the promised king had been born. With diligent searching, and through God’s divine guidance, they finally located Jesus and his parents living in a house in Bethlehem. The Bible tells us that when they saw the child, they worshiped him. This was more than a visit to welcome a future king. They worshiped him. They made it their business to know about the world and how God was working in it. They had encountered kings before. Possibly, they were rulers of some kind themselves. But when they entered this humble Jewish home, they knelt down before a small child and worshiped him. How could a bunch of star-gazers know this child was from God?

Matthew 2:9-11
“They saw the same star they had seen in the east, and they followed it. The star went before them until it stopped above the place where the child was.  They were very happy and excited to see the star.  The wise men came to the house where the child was with his mother Mary. They bowed down and worshiped him. Then they opened the boxes of gifts they had brought for him. They gave him treasures of gold, frankincense, and myrrh.”

Joseph was betrothed to Mary when he got the news that she was to have a child. Betrothal was a legal agreement between a man and woman. In fact, they were considered husband and wife except that they did not live together until the final marriage ceremony. Joseph was shocked and hurt when he learned about Mary’s condition. He was considering that the best way to handle this delicate situation was to quietly cancel the wedding. He didn’t want to add to Mary’s embarrassment, but neither did he want to be tied to her sin. After all, he was a respectable carpenter, and scandal was bad for business.
One visit from an angel in a dream changed everything for Joseph. The angel put things into perspective for the man who would be dad to the Son of God. Joseph was willing to be a part of God’s master plan, but he must have wondered why God chose him to play a part in it since he was only a carpenter…

Matthew 1: 18-20
“This is how the birth of Jesus the Messiah happened. His mother Mary was engaged to marry Joseph. But before they married, he learned that she was expecting a baby. Mary’s husband, Joseph, was a good man. He did not want to cause her public disgrace, so he planned to divorce her secretly. But after Joseph thought about this, an angel from the Lord came to him in a dream. The angel said, “Joseph, son of David, don’t be afraid to accept Mary to be your wife. The baby inside her is from the Holy Spirit.”

Mary was chosen by God from the beginning of time. She was an ordinary girl from an ordinary family. She was raised like every other Jewish girl in her time. She probably looked just like the hundreds of other Jewish girls her age. Perhaps the difference was inside her heart and mind. Perhaps she had cultivated a heart that was tender toward her Lord. She was truly amazed and humbled by the announcement the angel made to her. She couldn’t understand it. It was an impossible situation, but she accepted her role in it.

When Jesus was born, he looked like a normal baby boy. His parents, like all new parents, counted his fingers and toes, smiled when they heard his first cry, and marveled at the wonder of this new life blinking at the world he had just entered. However, this was no ordinary baby. This was the very Son of God! The Bible gives us all the information we need to come to this conclusion. We only need to look from the prophet Micah, to the village of Bethlehem; from the angels, to the shepherds; from the star to the visitors from the east; from the babe that lay sleeping in a make-shift, manger turned cradle to the first people to be blessed by His coming. Each of these was a gift from God. No, this was no ordinary Jewish baby!

Our Nativity is complete.

However, the story does not end there. Jesus grew to be no ordinary man! We read His story in God’s Word and marvel that He could love us so much after all humanity has done to reject Him. He loved us to the cross and back. He draws people to Himself from Texas to Illinois, and from Missouri to Madagascar. His blood that was shed on the cross was the most perfect sacrifice for all the sin of mankind. It was necessary for our salvation, and He gave His life willingly so that we might know God’s light and His salvation. But first, He came from heaven to earth as a little babe wrapped in the arms of a young Jewish girl who had no idea of the events yet to unfold. He chose to be born in a stable; in a barn where the lowest of humanity could come, and kneel, and know Him. There is joy and wonder in the story of the birth of Jesus. Of course, it is more than a story. Our challenge as Christians today is never to leave Him in the manger of our hearts as part of a cute and quaint Christmas tradition. We must recognize Him as the reigning King of Heaven and Earth who came to rescue mankind from the sin that engulfs us.

John 3: 16
“Yes, God loved the world so much that he gave his only Son, so that everyone who believes in him would not be lost but have eternal life.”

May your Christmas be merry and your heart be light as you celebrate the birthday of the King of Kings and the Light of the World.